It's what's for dinner

It was brought to my attention that I should post the food that I make along with the recipes. I tried doing something like that via Pinterest in the Dear Dinner Diary section, but posting recipes on pinterest is just not that easy. So I'm going to attempt to do a blog post for each one of the meals that I make. A lot of times, it will simply send you to the recipe I got somewhere off in the interwebs- I'm creative like that. But I can include realistic cook times and some tips and tricks that I've picked up while cooking with a baby on and a toddler helping/ under me. It's a party up in this hiz-ouse.

So, without further ado, here is tonight's dinner...

PS: does this make up for the lack of blogging I've done since getting all knocked up with number 2?? 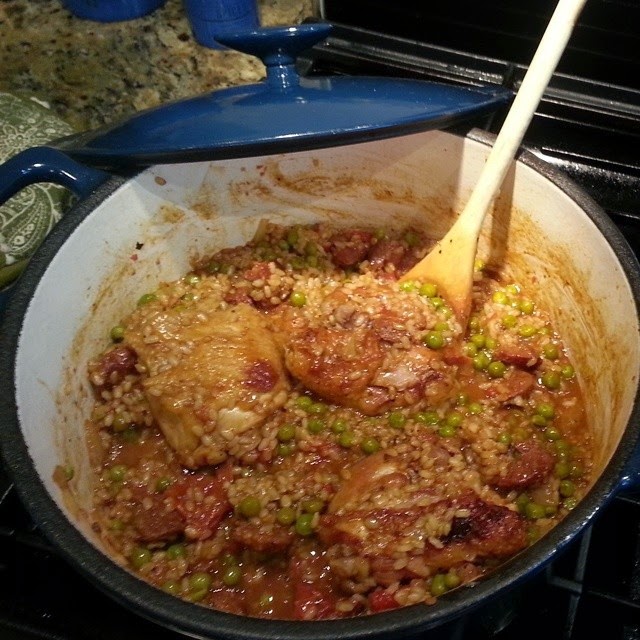 This recipe is Michael Symon's, here. Funny enough, He has a specific recipe for Chicken and Chorizo Paella but that is not the one I used...I saw that one later. However, this one came out delish. There should be a little less chorizo and some seafood in this one, but we don't eat seafood, so I simply left it out and upped the chorizo. This one uses saffron, which is fun and exotic and freakin expensive so I had to try it. I can't say enough how yummy this was AND how much we now have leftover which rocks for packin lunch for the hubbs. And you totally don't need a paella pan. The dutch oven works just fine. I started off using my cast iron skillet and discovered that there was no way everything would fit in there....But outside of skipping the seafood I followed all the directions as stated. And I used the chicken stock I make. And it only took an hour to come together...probably less had I not had a child on me. You will not be sorry if you make this. And I used short grain brown rice. He doesn't specify but I like brown better. 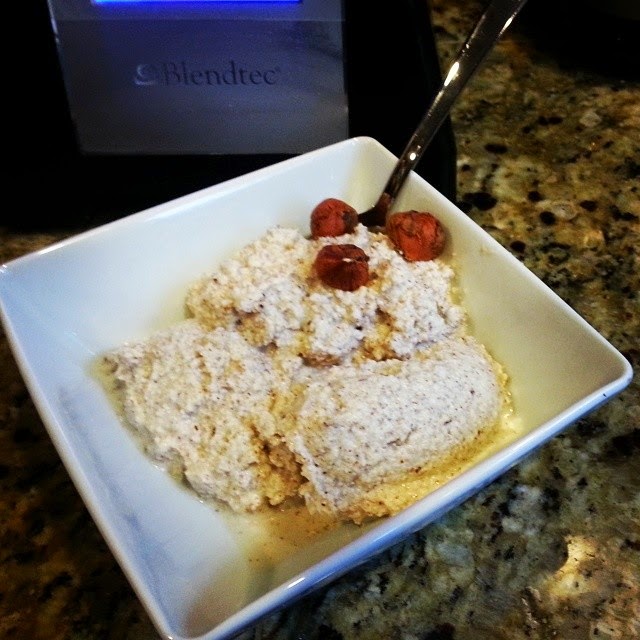 Unfortunately, I'm not sure if you can bust this one out if you don't have a fancy pants blender. But if you're doing a lot of cooking from scratch than TRUST ME you need a fancy pants blender. I use it more than once a day, the cleaning of it is simple, and it's bad ass. It can blend an Iphone. AN IPHONE. That's just awesome. I digress.

1 pint heavy cream (I think you could probably use half and half as well....)
3 1/2 tablespoons granulated sugar
1 cup raw hazelnuts
2 cups ice
pinch of salt

The Blendtec has a setting for ice cream making. I ran it 3 times because I was playing with proportions. It started to become butter, so DO NOT DO THIS. It was still yummy, but it was yummier when I tasted it after running it only twice. But for reals people. The setting is for 45 seconds. Which included chopping up the hazlenuts. So add in like 20 seconds for dumping above ingredients in blender. Outside of Italy, this was the most amazing gelato I've ever had. And let's face it...part of Italy was just the ambience...sooooo....yeah my gelato is the best ever ever.

And that was tonight's dinner.

And in case you're all like "ummmm we see the food you're making, and dessert, every night and we don't want to be fatties so no thanks" let me just say that both the hubbs and I have lose weight, and continue to lose weight while eating this stuff. Daily. We don't diet and we don't exercise (apart from running after babygirl who NEVER EVER STOPS MOVING EVER). But because we use all organic, made from scratch ingredients, we end up eating less and the food is good for us. So win win win win win.

Hope this new series of blog posts is helpful. I hope I can remember to post them.