Well folks. It's pretty clear I suck at keeping up with this blog. It seems we keep finally mastering (or at least having some semblance of calm) about one crazy phase of life, when the next, more insane phase comes around to kick us right in the arse.

Currently, that phase is known as SIBO. That stands for Small Intestine Bacterial Overgrowth. This is one of those tricky things that can only be officially diagnosed via a 3 hour breath test, but a lot of markers for it show up in an intense stool sample. I say intense because it requires 3 separate days of multiple poop samples on each of those days. I had to take this test, as did boyfriend. And though it seems like I may have it, it's almost certain that Asher does. My almost 4 year old. Who is still not really communicating. And who loves all things cracker and chip-y. Which are forbidden on the suuuuuuuuper restrictive diet to treat SIBO. And here we go.

On top of this, he for sure has leaky gut, is leaking toxins, and his body is not absorbing any fats or proteins. Not awesome. But starts to explain a LOT about why he's not developmentally where he should be when it comes to the talking. Since your brain is 60% fats, and he's not getting any....also explains why he's on the small side.

Since we have been an all organic, mostly no processed foods family since girlfriend's surprise arrival in August of 2011, it seems a bit surprising that his little gut is in such turmoil. Of course, he did get some of this from me. And the aspirin I had to take every day of my pregnancy with him to prevent blood clots (thus preventing another placental abruption) probably didn't help. But I believe our fun little bout with mold helped to destroy his digestive system over the year and a half that we were unaware of it. Mold is a rat bastard and it has sucked the literal life out of our family and I'm ALL FREAKING DONE WITH EFFING MOLD. Though it seems I am not, cause here we are, still trying to get back to 100% health.

And honestly? I'll take this ALL DAY LONG over something that isn't fixable. I thank God daily that we figured this out early in the game so he's not plagued by life long stomach issues like his mamma. Ones that could lead to auto immune diseases if not kept in check. That when the autism word was thrown around last year while trying to figure out why he wasn't talking, that we didn't just say "OK" and not look any further about other health things. It's awfully hard to try to figure out what's wrong with your child when they can't communicate at all if something is wrong. If their tummy hurts. If certain foods make them feel gross. Luckily my kiddos are not pukers at all. But it makes it hard to know if there is tummy trouble. I waited entirely too long to do it, but I finally went with my gut and decided to check out his.

Did I in a million years think it would be this bad? Nope. Not even a little. His doc said that she's never seen the leaky gut numbers (there's an official name, that I think starts with a Z?? I don't know...) that bad. Did I think that when we decided to do a stool test for him it would launch us into a diet that makes it virtually impossible to eat out (which makes it pretty impossible to travel) and that would have him taking eleventy million supplements twice a day? I knew there might be some changes we had to make, but man I was not prepared for this.

The first sign that this was gonna be difficult? The SIBO diet does not allow any garlic or onion. NO. GARLIC. OR. ONION. What in the whole wide world is this nonsense? Find one food that isn't made with garlic or onion! Gah!!

But we've been figuring it out. With the help of the SIBO specific diet food guide I've been figuring out ways to make our food still yummy. And to add in a crap ton of sneaky veggies into everything. Because boyfriend has never been a fan of fruits and veggies, but his organs are pretty pissed about it, apparently.

One trick is making garlic infused olive oil for flavor. The other is you can use the green tops of scallions and chives in place of onions.

I've been posting the successful recipes on facebook and pinterest. My hope is that I can get more detailed recipes here. In between trying to shove all the syringes full of all the supplements into boyfriend's mouth 80 times a day. Ha!

But for now, I leave you with a recipe I came up with for smothered pork chops because I needed comfort food. And this did NOT disappoint. 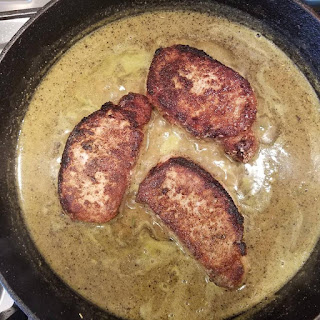 "bread" the pork chops with almond flour, salt and pepper. Brown them in a cast iron skillet with EVOO. Remove from pan. Add some butter and some more almond flour- I think I used 2 to 3 tbsps of butter and probably 2 tbsps of almond flour. Then add pureed 1 yellow squash, 1 zucchini, and a bunch of green scallion tops. Add some dry mustard and sage. Then add bone broth (SIBO only allows you to use bone broth from beef because there is almost no cartilage on them). Add the pork back in and cook on low until meat is done. I served it with some roasted carrots and an arugula salad. I topped mine with feta cheese (not SIBO approved) but raw aged cheddar is and that would have been delish as well. Boyfriend is not a huge cheese fan so he didn't want the cheese. 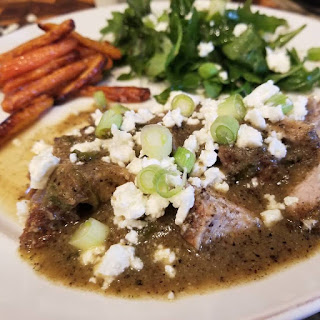 This was stupid good. Seriously. Ava drank the gravy. And all the sneaky veggies in that gravy. Mwa-haha. Mamma's learned some tricks.

EDITED- I should add that since we've started the diet, the supplements, and doing an activated charcoal detox for him, boyfriend has made some HUGE strides in both speaking and in following directions and communicating. It's been pretty amazing, so I'm willing to do whatever it takes to continue!