Well, it's been a while....and also Osso Bucco in the Instant Pot

Anyway. I have valid reasons. Scattered along with laziness, sickness, and "this all just sucks right now"- ness.

Here's the short scoop- my health has been taking a nosedive for over a year now. My back, then constant nausea and dizziness, then we added in headaches, threw in some stomach flu (which fixed everything for approximately 2 weeks, then it all returned with a vengeance), and for the grand finale, an allergic reaction that led to my cheeks, lips, and tongue swelling up for mysterious reasons. That was a bit terrifying. Which led to allergy testing via a million skin pricks, which brought out THE WORST allergies I've ever had in my life- itchy eyes, itchy mouth, crazy sneezing, and now a complete inability to wear eye makeup. (For those that know me, I have NEVER LEFT MY HOUSE WITHOUT MASCARA EVER EVER. because I look like a hairless cat. And I've now gone out IN PUBLIC. TO FUNCTIONS. INCLUDING NEW YEAR'S EVE without any on. which makes my vain self weep).

I digress. Obviously, I tried to figure out all the things that could be making my poor body suffer this way. And in asking on our neighborhood facebook page, someone suggested we have our air conditioning ducts cleaned. So I set up the appointment- because Lord knows the previous owner was a hot mess and probably never had it done. And what did we discover?

MOLD. Mold all over and through our ac units, airducts, and vents. FRICKING. MOLD. And funny enough, you know what all those skin prick allergy tests showed? That I'm allergic to indoor mold. I'm in the fun 25% of the population who, when exposed to mold, instead of their bodies attacking the spores and making me healthy, my cells start attacking my other cells. Leading to crazy amounts of inflammation (hello unexplained inflammation found in my gut after a stool test- high levels are 100-200 and mine was 465), dizziness, headaches, lack of remembering things, lack of developing (hi from my almost 3 year old non talker). ALL OF IT.

I'm not gonna even get into many details- that's for another post, when I can address all the things we've done, and are still doing, to work this mold out- because we're still in the throws of making sure it's nowhere else in our house, and detoxing from the YEAR AND A HALF that mold spores blew down on us constantly. It's a long, and crazy expensive process.  So yeah. looking forward to writing that post.

I finally listened to my gut, and got little man blood tested for food allergies. He only poops once or twice a week, he's become really picky about food and fights eating, he has that red ring around his little butt hole, and he has patches of bumpy skin- not a rash or red, just raised. And we discovered that he is off the charts for gluten, wheat, bran, and really high for coconut, peanuts, eggs, chia seeds. You know. All the stuff he eats and bathes with.  Perfect.

So, in the midst of evacuating our house a million times (mold, hurricanes, Thanksgiving....) we got an Instant Pot. Which has been A-MAAAAYYYYYY-ZING. And now, I get to figure out how to make all the things that boyfriend can eat.

So here is my first (intentional) gluten free meal- Osso Bucco. I, as usual, like to borrow recipes from my (in my head) friends at The Chew and The Food Network. (Yes I daydream about being besties with all of them, and being on The Chew and cooking with Michael Symon would complete my whole life- #squadgoals).

Michael Symon's Osso Bucco. It looked so amazing, but I was super feeling a more tomato based meal. So I stole some of his elements and added them with Mario Batali's Osso Buco. (Side note: I have no idea why they are spelled differently. It's one of the things that drives me slightly batty about The Chew website. However, their recipes are always without a doubt the most delish way to cook food ever ever, so I forgive them).

So between that, and using my knowledge of how the IP works, I came up with this:

- a big hunk of pork butt (who even has the money for that much veal after Christmas? And pork is fattier- my fave). I used 4 pounds and cut in half to brown better
- 1/4- 1/2 cup white wine
- 1 jar (18 oz) whole peeled tomatoes
- 1 cup bone broth
- squirt of anchovy paste- literally a drop or two of it
- 1 tbsp capers
- 1 sweet onion (it's what I had), chopped up
- handful baby carrots, cut in half
- a few cloves of garlic
- dried thyme, to taste (didn't have any fresh on hand)
- 2 tbsps butter (always always always Kerrygold- it'll change your life)
- extra virgin olive oil
- zest of one lemon
- 1 parmesan rind (cause I had it and it sounded good)

Before I tell you the steps I will say it was a hair more liquidy than I would've liked, so I might not add quite as much liquid as that. And as much as I super love chunky tomatoes in things like this, I think using crushed tomatoes might have served me better here, to spread out the tomato flavor throughout. I mean, it was DELISH. But everything can be improved on.

So I throw in some olive oil and brown up the salt and peppered pork. Then remove. Throw in a tad more oil and the butter and add my onions, carrots, a little more salt and pepper, and the thyme.  Let it go for a few minutes then add in the garlic (here's my fun, garlic trick, so it's always easily and readily available- it's the 2nd half of the post. and also a trick I learned on The Chew. Shocking), and the anchovy paste (usually sold near the tomato paste. and I don't like fish at all, but it does add a nice depth of flavor. a little bit goes a long way.) A little tomato paste at this point would also work really well if you felt so inclined. Let that cook for a minute, then throw in your white wine and deglaze- make sure to scrape all the good bits up off the bottom of the pan. There lies all your flavor. Add the bone broth and the tomatoes (Jovial is my favorite brand- tomatoes from Italy, organic, AND they don't add in any flavors. I LOATHE when every single stupid brand adds basil. WHY!?!? WHY DO THEY DO THIS!?!?). Zest your lemon right in there, then throw the pork, and all the juices that accumulated in whatever holding vessel it was in, and add the parmesan rind. 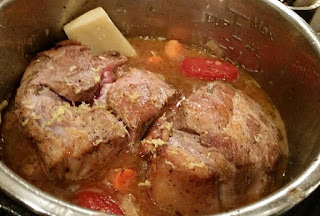 We decided to let this slow cook for about 6 hours while we were out. We came home and discovered that it was delicious, but not as fork tender as we would like. (that was at about hour 5). So we pressure cooked it for about 25 minutes. That did the trick.

Then I hit saute to get the sauce to thicken up a bit.

And made my polenta while waiting. I still make it on the stovetop. I have reservations about making it in the Instant Pot, because I like to control the thickness- I love a creamy polenta. Also, I only have one instant pot. So here's my no fail base for polenta/ grits. It's Robert Irvine's recipe, and it's always a winner-

I throw in the broth, milk and butter and bring to a gentle boil. Then I slowly slowly slowly whisk in corn meal little by little. It thickens up a lot as it cooks so when I say slowly, I mean about 1 or 2 tbsps at a time, whisk well for a minute or 2, then add a little more.  Once you get it to the consistency you want, add in your salt and pepper, and any cheese you would like to use. For this, we used pecorino romano (you can get a giant hunk of the Locatelli one at Costco. SO GOOD.) 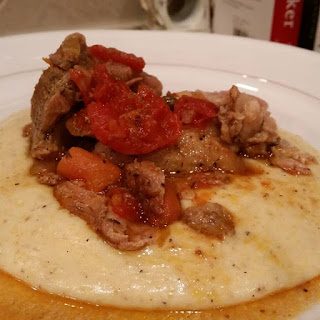 So I hope that was helpful. I'm an Italian cook for sure- everything is "quanto basto" (to taste).  So maybe writing recipes isn't really my forte. Ha!