I mean, really. Another 5 (oops. When I started perhaps. Now it's like 8) months have gone by. And I haven't posted once. I haven't even contemplated posting. I am the literal worst.

Seems like life keeps throwing punches that leave us scrambling to catch up. In the great "what next in craptacular" saga that is our house... we found mold. Again. Or still. Who even knows. Hubbs and I had a *bit* of a tiff over the leak in the master bath and whether or not it was bad. I maaaaaybe yelled, a lot, that my swelling tongue and lips don't lie and there is still mold and he maaaaybe got fed up with said yelling. And perhaps grabbed a hammer and tore into the tile on the shower and tub out of spite.  And, it's entirely possible that we both went "oh shit" as we surveyed damage we had no idea we would find at a time where we had zero things lined up to fix it. Sooooo......yay. And onto searching for new everything, including subfloor, and someone to install it all.

It occurred to me that since we had everything all ripped open that perhaps we should treat the beams for mold because I never want to have to deal with this nonsense again. So I googled all the things to kill mold. Apparently, KILZ  doesn't cut it. There was one treatment and paint that it said worked, but the paint alone was over $300. Then I stumbled onto Green Home solutions. They're a green company that performs mold air quality tests (for $200 less than the other crap company we used and a hell of a lot more thorough) and they fog your house with a chemical free enzyme that eats and destroys mold. They spray down your furniture, curtains, clothes, EV-ER-Y-THING. And it doesn't need to be taken to a cleaners afterward because it's all natural. And so we had it done. And NOW we are officially mold free.

Cut to a month later. We've been out of our master bedroom and bathroom since February. Finally found a contractor. And BOOM. our upstairs HVAC system crapped out. Turns out, we had different sized air intake and compressor. Meaning it never should have worked (it really never did, hello ridiculous electric bills and a never cool enough upstairs)  and it should have died a looooong time ago. Awesome. So we purchased a brand new system. Bleeding money.

Father's day weekend. Where somehow everything went wrong. Hubbs got poison ivy. We still don't know from where. I kept him far from the kids. But one night boyfriend developed a fever. And then. This.

I mistook it for poison ivy at first. But NOPE. Both the kids managed to get hand foot and mouth. Thankfully, they were mild cases. So I sequestered us to one room. And at some point, I managed to jack up the good side of my back. Had nerve pain and leg weakness. Went for an MRI. And yup. Some of the "jelly" squished out of my bulging disc on the right side and the fragment was sitting on my nerve. Soooooo.....bed rest mostly. No lifting, no twisting, no bending.  Awesome. 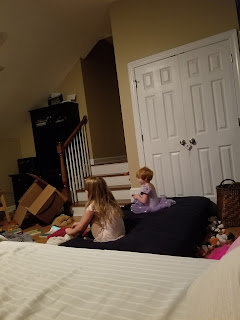 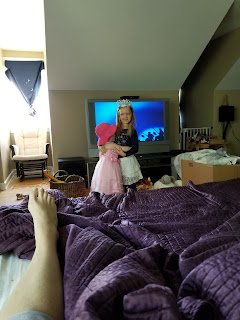 " The room."
Girlfriend decided her new favorite was to dress up boyfriend and teach him how to dance. Also. Boxes as toys. All. Day. Long.

So Nana flies down to help take care of 2 restless kiddos to try and heal up my back, cause I can't walk or stand for more than 10 or so minutes on what was previously my fully functional side. Thursday, my son decided to climb down the slide in our house (daddy built an amazing play area inside) while holding a giant toy. He fell off sideways, landing in their box fort that had a plastic chair in it. Snapped his femur. And now, we have this. 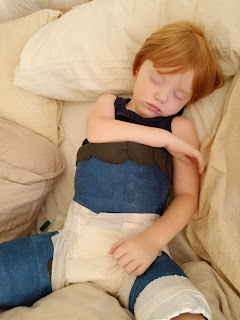 Full body cast for 6 weeks. Can't get wet or sweat (ummmm.... hi from 100 degree humid South Carolina days). Not too much movement. Changing his diaper is now an Olympic sport. He refuses to poop unless he's standing up. Oh yeah. And I CAN'T LIFT ANYTHING.  So, you know, totally doable.

In a nutshell, we cray. And life doesn't look like it will resume normalcy anytime soon.

But our new bathroom is pretty. (Thanks, Nick of All Trades!) 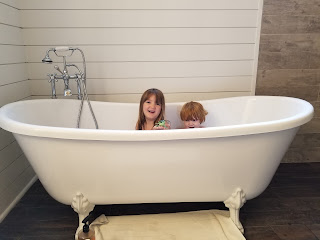 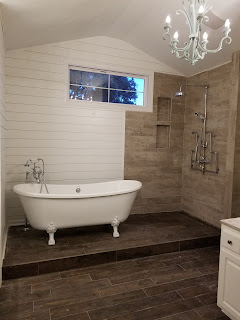 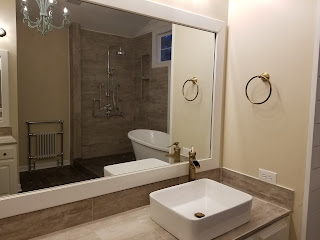 So. If you don't hear from me, here's why. I don't even know if I had a chance to write about our adventures with boyfriend's food intolerances diagnosed in January. We've been gluten, egg, coconut, peanut, green pea, cashew, wheat, chia, and watermelon free since then. YEAH. I KNOW.

I actually ended up baking some pretty delish focaccia and biscuits and other stuff. I posted on my Facebook page and perhaps one day I'll get around to getting the recipes online here. Today is not that day. This year is not that day. We may need to get an exorcism for our house at this point.