I LOVE hummus. The Indian restaurant we go to, Clay Pit, in Mill Creek has some of the best I've ever had. Check them out. Their food is amazeballs.

I LOATHE hummus from grocery stores. Call me snooty (I am, but not because of this), but I just can't find one brand that I like. The main problem is that they add all sorts of preservatives to "keep it fresh", and my taste buds are almost as sensitive as my bloodhound schnoz. You think I'm kidding? The reason we got rid of all of our plastic tupperware years ago was because I COULD TASTE THE PLASTIC ON MY FOOD. Everyone thinks I'm insane. but I could taste it, and it ruined everything.

anyway, most companies also put cumin in theirs. or some odd spice that I don't think belongs in hummus. so I ended up throwing out copious amounts of it. bummer.

and then, I figured out that I could make it myself. HAZZAH! And between my brother and I, we've made countless flavors. But my fave is still the simplest. It's Alton Brown's basic recipe on the Food Network website, but I didn't use his measurements...I didn't love it the way he has it measured out. And I don't measure. Everything is to taste, so you just have to add little amounts slowly until you get to the magic. 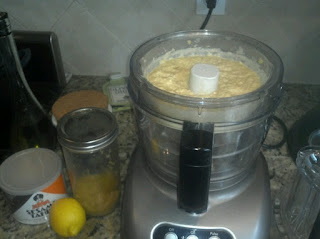 First off, a food processor makes this a bajillion times easier. If you don't have one, you can use an immersion blender (a wand) but it takes a lot longer.

Second, I never used canned garbanzo beans. Those cans have some nasty stuff lining them that I'd rather not expose myself too.  Plus, if you buy in bulk, it's much much cheaper. They're supposed to soak overnight before you cook them, so I make a crap ton of them and freeze what I don't need. I freeze them in 2 cup portions because that makes the pretty perfect size for our family for a week. (that amount is what's shown in this pic- it's the smaller bowl of the kitchen aid food processor).  I also, when I'm feeling charitable, will shuck the garbanzo beans. that takes approximately forever. it makes the hummus much creamier, but sometimes it's just not worth it. This time I did not, and it's still deliciousness.

I use the juice of half a lemon, some sea salt, a spoonful of tahini (sesame paste- I use the Joyva brand), olive oil, and sometimes some roasted garlic. And filtered water. That's important. Throw it all, minus the olive oil and water, into the blender. If you have a food processor, you'll notice that the blades almost immediately get stuck in all those beans. Start pouring in some olive oil and water while it's running and it loosens up. I would say start with a few tablespoons of olive oil and a quarter cup of water and go from there. You may like your hummus a little thicker, so don't add as much. I like mine super creamy so I add a bit more than that. then you just have to keep stopping it and tasting to see if anything else is needed. easy peasy. and yummy.

And then, there's the garlic. We use garlic on an almost daily basis. It would be a pain in the butt, except for this little trick that I picked up from watching The Chew. It has SAVED US. I can't say enough good things about this trick, and I hope you run out right now and DO THIS and tell me how amazing it is. Cause it is. Ready? 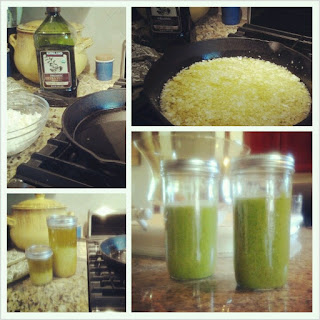 Buy a bunch of garlic. Buy some evoo- which you should really always have anyway cause that and coconut oil are the best ones, taste and health wise. Costco sells an organic evoo that is awesome, and the only one we use now. Get out your cast iron pan. If you don't have one, go get one. It is life changing. throw out your teflon, PLEASE. Put about 2 to 3 cups of oil in the pan, and heat it up at a fairly low temp. Put all your peeled garlic in a food processor/ ultimate chopper/ grater-type device. If you do this by hand it will take a very very long time. You want it finely chopped. Add the garlic (about 40 cloves) to the olive oil and cook it until it starts to turn tan. You want it soft but not browned. The oil should cover the garlic in the pan. Once it's done, pour it all into a mason jar. leave room at the top because you'll need to put about 1/2 cup to a cup of olive oil to it to stop it from cooking more. Then refrigerate. This lasts for at least a month or two. It's DELICIOUS, it's so easy to now add fresh garlic to whatever you're cooking, there's no chemicals in it like that garbage they sell in a jar, AND you now have GARLIC INFUSED OLIVE OIL. yup. homemade. Dip whatever in there and it's a party in your mouth. Use that to make salad dressings. And garlic is so so so so good for your body. Seriously, if I had to choose just one thing to learn from watching The Chew, this would be it. Oh, and watch The Chew. I DVR it so I can watch while I'm cooking. I'm a little in love with Michael Symon, and I'm pretty sure Daphne Oz and I are soul sisters (italian jersey girls who married serbians. we are best friends, she just doesn't know it yet).

The last picture is of a green garlic pesto. If you buy green garlic, which looks like scallions, you can use the bulbs for the roasted garlic and use the stems to make the pesto with some toasted almonds, parmesan, salt and evoo.

Anyway. Those are my tips for delicious snacks and helpful hints. And a pretty picture for good measure. You're welcome.