No. It's not because I'm pregnant.

Because I'm not. Let's not get anyone over excited.

I have this morning routine, that I've been doing for about 6 or 7 months now. I love what it's been doing for my body, my skin, my energy level, my metabolism.

I just hate my bladder.

I suppose this may not be the best way to sell my healthy ideas, but I'm nothing if not honest. And I've kept it up this long, so obviously the benefits are far outweighing the pee factor. Except for that one time that I tried to drive to a friend's house and had to pull off the highway and stand in line at a starbucks so I could pee. That day sucked (ever try to get a toddler out of a carseat and into an Ergo while doing the pee pee dance? good times, my friend).

So what is this amazingly awesome routine you ask?  It starts with this: 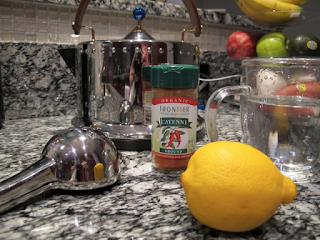 Thanks to Food Babe, for both the pic and her blog about this habit, which made me try it and love it.

Every morning, the first thing I drink/eat, is a glass of hot water with lemon and cayenne pepper. Oh stop, it's not nearly as bad as it sounds. It's not my favorite flavor on the planet, but I don't gag, and I gag at EVERYTHING. Even just thinking about having to take a spoonful of cough syrup induces an almost vomit. So this is just not that hard. And I feel fabulous after it. I'm a serious coffee addict, going on 20 years now (I. AM. OLD. ugh), and this wakes me up more than any cup of coffee I've ever had. No, that does not mean that I gave up coffee. Let's not be ridiculous. This combo helps get rid of toxins (thank you lemon) and kicks up your metabolism (thank you cayenne) and of course water is always good for you. There was this diet that I tried some years back- lemon, cayenne and maple syrup and that's all you can drink for 10 days and you lose weight. Dumbest idea ever- of course you lose weight. You're not eating. However, there is actually some benefit to drinking it, minus the maple syrup, so this makes perfect sense to start your day this way.  Here's what cayenne can do for your body: 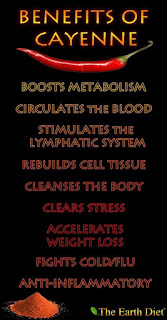 Thanks to The Farmacy for the info. I've also read that it helps fight cancer cells. Another bonus.  And of course, there's the lemon. 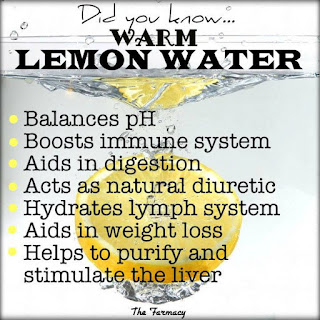 Also, from The Farmacy, and also amazing.

So yeah. I do this. I use about a cup and a half of water, juice of half a lemon, and a few shakes of cayenne. If you're not a fan of spice, maybe just start with one shake. I boil half of the water, and then use half from the fridge so I don't have to wait too long for it to cool down enough.

Now on to part 2 of the Pee Conspiracy. My breakfast. This is what we all have for breakfast every day (minus Saturdays...hubbs makes the bomb breakfast, and so I let him. as if I'm gonna totally give up bacon. HA!)

The Yogurt Smoothie. Not only is it so so good for us, but it is delicious. Babygirl claps for it when she sees it. There are a few variations that we use (afterall, variety is the spice of life), and all of them are delicious. I don't have a picture of this. Sorry. But I think you know what a smoothie looks like.

Yogurt-  I make my own. I love Fage, but it's not organic so we quit that. I bought a yogurt maker (the Euro cuisine one) and I have to make it about once a week. Super simple, and the yogurt is delicious. It's a little on the thin side, but we drink it so who cares. I bought the culture starter for the yogurt from Cultures For Health. Currently, we're using the Bulgarian Yogurt culture (makes my hubbs miss his childhood), but I also bought the Greek one, just haven't used it yet. Once you make the starter, that's it. You continue to just use some of the yogurt from that batch to make the next batch and so on and so on. As long as you don't wait too long to make it (a week is the most they suggest you wait), you'll have a starter for as long as you want it. Best $12 I ever spent (on food. I've spent $12 on some fabulous shoes and that beats out food every. time.) If you have zero desire to make your own yogurt, let me just suggest that you stick with an organic brand. And obviously, plain yogurt. No sugar/ fruit/ artificial sweeteners please (see that?  I said please. sometimes, I'm not overly demanding.)

Greens- We use big handfuls of organic baby spinach. The pre-washed giant box from Costco that costs $4. it's cheap and it's not filled with dirt. I never realized how hard it is to get spinach leaves clean. Again, it's really important that for leafy greens, you buy organic because they suck in a lot of pesticides. Chemical cocktail is not what we're going for. We've also used kale, chard, frozen spinach and any other green I happen to find in my fridge. Spinach is my fave. frozen spinach doesn't work quite as well- takes a lot longer to get a smooth smoothie. doesn't matter how much you put in there, I promise, you won't taste the greens. so load it up.

Chia seeds- organic. I put mine in a food processor because the hubbs requested me to. I don't think it's bad without doing that, but hubbs said it gets all stuck at the bottom of his cup. and because I'm an amazing wife, I mill them for him (while rolling my eyes and silently judging him).

Hemp seeds- GMO free. I have yet to find organic hemp seeds in the store. The ones they sell in Costco and in Whole Foods are certified GMO free so we use those. If you know of an organic brand, let me know!

Almonds- I was using almond butter, but I ran out, and just threw a handful of almonds in there and it was still delicious. Either works. And almonds and yogurt are a really healthy food-pairing...don't ask why I don't remember exactly, but it was on a list and I believe it.

Pro-biotics- yes I know. yogurt is full of them. but sometimes you need a little extra. we buy the infant pro-biotics since I make this for all 3 of us.

Coconut Oil- because it makes everything better. You could also use coconut meat or milk. just coconut in some form.

Frozen organic berries- giant bags from Costco. they are amazing- pomegranate, cherries, raspberries, blueberries and strawberries. such a good blend.

Water. those frozen berries can clump it up, so we add filtered water to smooth it out.

That's basically it. You can add some citrus (we can't cause of babygirl right now, but maybe someday). You can add fresh basil, cilantro, parsley, mint- they are fantastic for you and will give it a little kick. When I'm feeling like I'm in 2nd grade again, I'll add peanut butter instead of almond butter and it tastes like a pb&j. and sometimes you just need one. if you were to drink one of those while eating a grilled cheese sandwich, you would find nirvana. without all that meditating nonsense.

(yes yes yes, i know the benefits of meditating. it was a joke, people. that's hard work for relaxation if you ask me.)

Currently, I'm making mine without the yogurt. Yogurt is amazing, and amazing for you. It has such healthy bacteria. However. I'm allergic to whey (which is the liquid you find on top of yogurt- it's a by-product of making it). So I'm seeing if it makes a difference leaving out the yogurt (read: I'm seeing if I poop less without the yogurt). So far, no difference. Oh yeah, you'll poop after you drink this. Guaranteed. You should know that going in.

And finally, I of course finish up the morning with a cup of coffee- thank you Nespresso. Best investment. If you're looking for a new coffee maker/ espresso maker, BUY THIS. I cannot say enough good things about it. So I get a cappucino every morning. Made with organic milk, a tbsp of coconut oil, and a little bit of raw honey. It doesn't actually need the sweetness, but especially during allergy season, I try and eat local honey every day since my body is still rejecting Washington.

And I don't believe for a second that coffee isn't good for you. That was made up by some fascist.

I love this routine, and I think you should give it a try.

So that, my friends, is why I pee like I'm pregnant. But I'm not.