Nights in Morocco...or maybe just food from there... 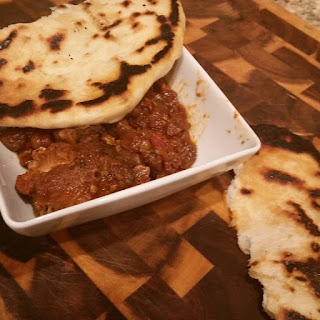 Listen, I'd love to spend some nights in Morocco. But for now, we'll have to settle for the one in Epcot Center. Not so sure the 19 month old would fully appreciate all the nuances of different cultures, so we'll give it a few years before we start traveling internationally.

Honestly, I just super don't enjoy cooking chicken. Mainly because almost every time I do, the response I get from the hubbs (and myself if I'm honest) is "meh".  I mean, it's tasty. But it's not like beef or bacon tasty. The poor chicken. Not enough fat. Not enough flavor. Everybody's diet food.

So I've been experimenting. And I happened upon a recipe for Moroccan chicken thighs and lentils. Score! I have a crap ton of lentils that I haven't ever used. And it calls for dried apricots. Score again! We have a bag of dried apricots.

Wait. Just opened the bag. Ummm....did you know that dried fruit can ferment? Well. It can. And it did. Good thing I have some yellow grapes on hand. Close enough.

So. Here's the recipe I used as a base. I changed a few things...because of course I did. So. For the rub for the meat, I didn't use garlic powder. I don't have any. As a rule, I super hate garlic powder. I'd rather go ahead and put the real stuff right in there. And with my roasted garlic trick,  it's easy peasy to use fresh garlic always.  I also only used a portion of the cumin they say to. because I really don't care for cumin. I get that it's the base of so much of the food that I love....but I would rather taste the other stuff and cumin is SO STRONG. I also used smoked paprika. That stuff is amazing. And I was heavy handed with it. I threw in a little crushed red pepper as well for a kick. 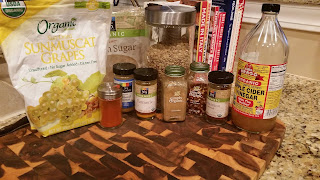 I added whole peeled tomatoes (Jovial brand is my favorite- glass jars for the win!) I did not add ketchup. I just added a splash of red wine vinegar and some brown sugar. I probably should have added some tomato paste as well, but oh well. maybe next time. I was gonna add almonds too, but my brain is not firing on all cylinders. Whatevs, it's delish.

And finally, I only had green lentils. So that was it.

I rubbed the chicken, browned it, removed it, sauteed the onions, then added the lentils and gave them some nice color and flavor. Then I added the garlic, and then I added the liquid stuff. Then threw the chicken back in, brought it all to a boil, and threw it in the oven for about an hour and 15 minutes at 350. BOOM. 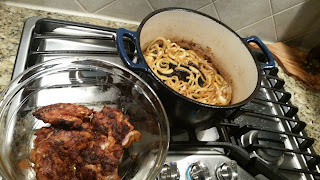 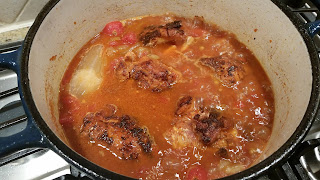 The smell in my house. Can't even explain. 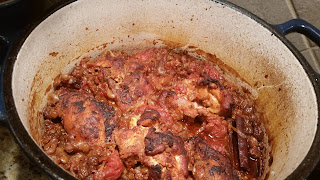 And now. Onto the flatbread. Yes the above recipe is gluten and dairy free....so if you need that then you're all set.  But me??  I prefer the Moroccan way. Which is...use flatbread as utensil. YEEEESSSSSS.

Here's the flatbread recipe.  Other country's measuring units are dumb. The hardest part about this was figuring out how much of everything to add. And, since I make bread a lot in different places, I know you can't just add ALL the flour they say to. You have to add slowly as needed.

So. I started with 2 1/2 cups of flour, a little more than half a tablespoon of salt and yeast, 2 tablespoons of butter, and 1 1/3 cups of warm water. Then I added flour as needed until it developed a ball in the kitchenaid mixer. It ended up about 3 1/2 cups I think. 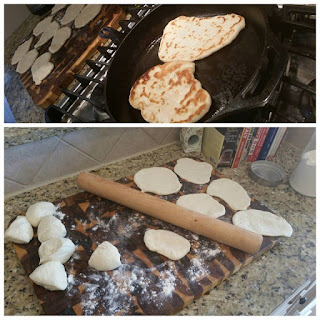 Follow the directions to let the dough rise. Then cut it into 12 and roll them out. Get a cast iron pan really really hot, add olive oil and go ahead and cook em up. It's ridiculous how good these are. I ate the first one with nothing on it. Just straight up ate it.

And the two together???

This meal is magical. No joke.