If you love breakfast, make this pasta NOW (in 20 minutes total!) Spaghetti Carbonara

I love bacon and eggs. Always and forever. We eat eggs every. single. day. There's nothing better for breakfast. Nothing. The kiddos agree. And bacon? Duh. (whole foods dry rubbed black forest bacon. get it).

So when I'm feeling lazy/ want to eat breakfast for dinner, I whip out a pasta carbonara. Bacon and the eggs are the sauce. However, I haven't been super successful in making this dish in the past. Don't get me wrong, it's still been delicious, but it hasn't been that creamy goodness that I dream of. Until yesterday.

I've tried Mario Batali''s recipe, and you had to separate the eggs, and it was work, and I screwed it up and made slightly scrambled egg pasta. So last night, I used Clinton Kelly's recipe as my base. Ummmm....AMAZEBALLS. So easy, and the best carbonara I've ever had hands down. Because I was feeling like a lot of veggies but didn't feel like making a salad, I took a few liberties with what I added in there. I'm sure it would have been just as amazing if I had followed his recipe exactly, but I think my stuff put it over the top!

So. You make some bacon. Obvs. And buy good bacon. The one I referenced above will change your life. No exaggeration. Then drain some of the bacon grease (but you save that shit in a mason jar because cooking in it is heaven and you don't have to go try to find a good lard which is exactly nowhere most of the time). At the same time, put on a pot of boiling, salty as the sea water for the pasta.

I cut up cherry tomatoes, scallions, some frozen peas, and some frozen corn. They work really well together and then you don't need side dishes. It's all about the lazy, people.

Whisk the eggs into a bowl with a good dose of that starchy pasta water (obviously, let the spaghetti cook for a few minutes to get starchy enough. And add it slowly to the eggs, because you don't want to cook them. He has all this in his directions, but I figured I'd be thorough. Add salt and a lot of pepper and grated parmesan to the egg mix.

Throw the veggies and the bacon into your skillet that you cooked the bacon in, with the bacon grease and a little olive oil. Once the pasta is almost done, add it to the skillet, along with a ladleful of pasta water (or more as needed). The pasta will finish cooking in the skillet and soak up all the goodness and be nicely prepared to accept the egg mix.

REMOVE THE PASTA FROM THE SKILLET. So important, otherwise, you'll have an egg scramble. Put it in a bowl. Then slowly add in the egg mix. Stir. Grate some more parm over it because cheese. Eat immediately.

Holy. Freaking. Crap. I could seriously eat this every day of the week. Clinton Kelly is a genius with adding the pasta water to the mixed eggs. And it's SO EASY. It took about 20 minutes to throw this together, start to finish. 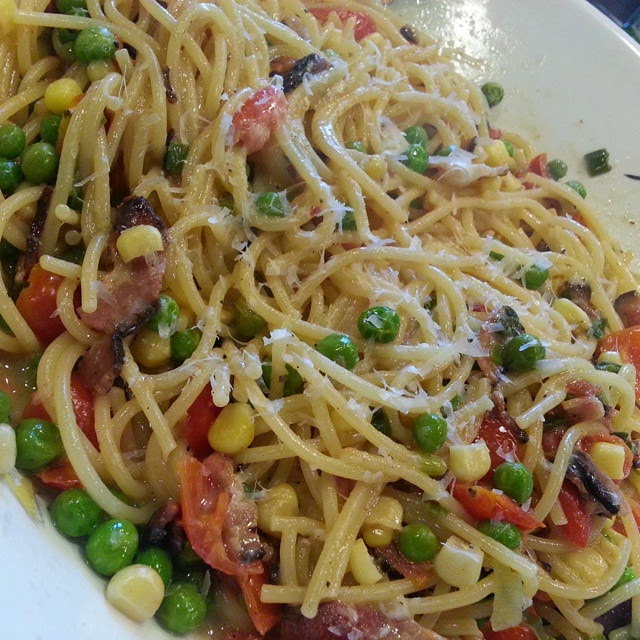 This will not disappoint.