So, while searching for a yummy cranberry sauce recipe for Thanksgiving, I stumbled across Carla Hall's sweet potato latkes and cranberry chutney recipe. So I made the chutney and thought nothing of it.

Until the other night. When I had a ton of chutney, some sweet potatoes I didn't use for Thanksgiving, and some brie just laying around. And I was feeling particularly lazy, so didn't defrost any meat for dinner. And I was wondering how on earth I was going to somehow turn that into an entire meal. And then, brilliance struck.

I had eggplant. And brie. And pancetta. And so, I made some stackers. 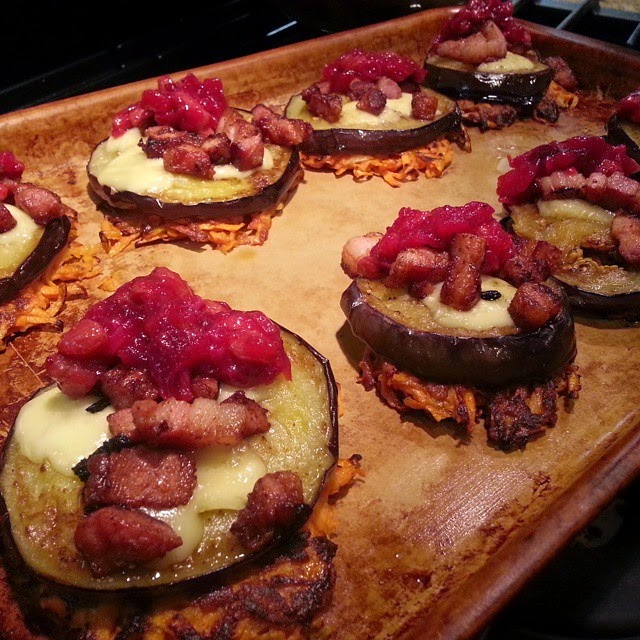 I followed her directions for the latkes. Then I sauteed some eggplant in my trusty cast iron skillet in evoo, salt and pepper. Then I topped that with brie. I stuck that in the oven under broil until the cheese got all melty and bubbly. While it was broiling, I crisped some pancetta in the skillet. I topped the stack with that, and a nice big dollop of the chutney.

I honestly had no idea how this would turn out. But it was incredible. Shockingly amazing. All the salty, sweet, creamy, crispy deliciousness.

You should make this for sure!