Amazeballs! BEST SPAGHETTI AND MEATBALLS EVER AND EVER THE END

I've probably made that claim before. But this time, I super serious mean it. Because this was the best meal ever. Not only was it the PERFECT way to end a week that wasn't so hot (so. much. house. to. fix.), but it also just matched the rainy cold mood outside. 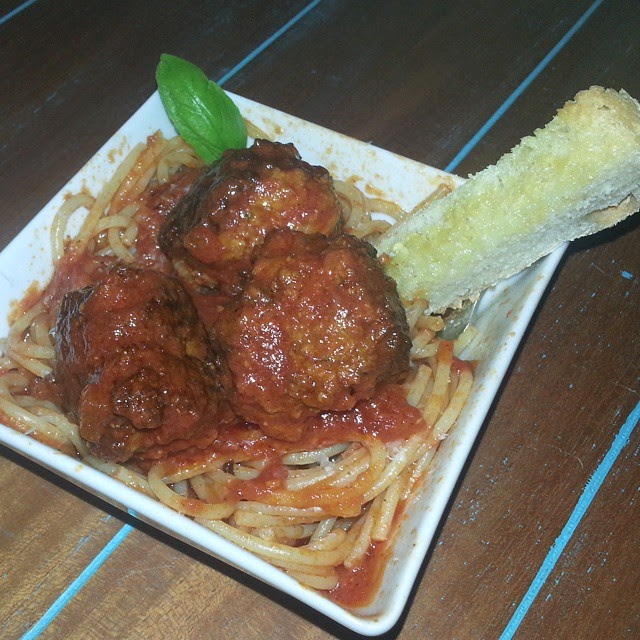 Come on now. That's perfection in a bowl right there. This is one of those meals that we wish we had people over for because everyone should know how freakin delish this is. But I'll share all my secrets. And of course, some of them are not mine. Because internet.

The meatball recipe is courtesy of Alex Guarnaschelli. You see her judge on "Chopped", and she just recently became an Iron Chef. And the woman can give perfect mom face. And apparently, she also has a mother that created the world's greatest meatballs. I was skeptical at first because really? Sour cream in meatballs with gravy? But I decided to give it a try. So here's what I did. 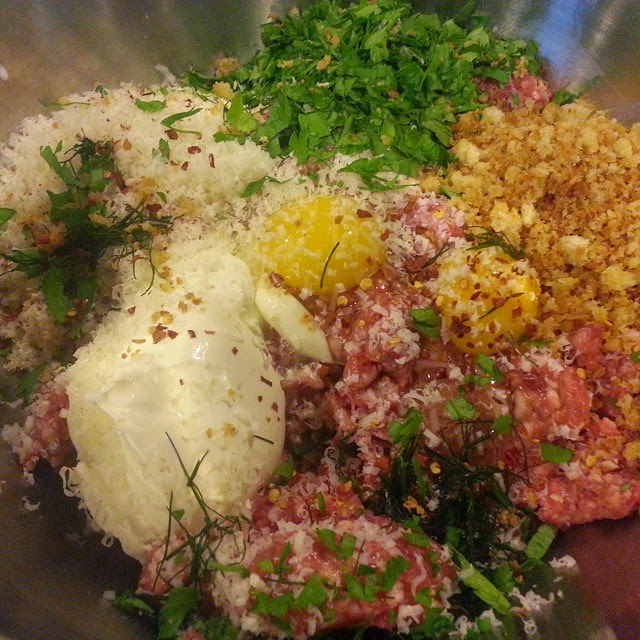 I used half pork, half beef. I actually used half breakfast sausage from whole foods, which is just ground pork with some sage in it. I didn't taste the sage at all, so you could go either way with that. I also NEVER have fennel fronds, but I happened to have them, so I used those instead of the fennel seed, because fresh herbs in meatballs make life sing. I followed everything else exactly as she said to. I thought it was CA-RAZY to not use garlic or onions in the meatballs, but she knows what she's doing. Oh yeah, and also I made my own breadcrumbs. I just used some baguette I made, ground it up, and toasted it in the cast iron skillet with some butter and olive oil. I recommend this. I hate store bought breadcrumbs.

So I cooked mine in a big ole dutch oven. The one I then made my gravy in. 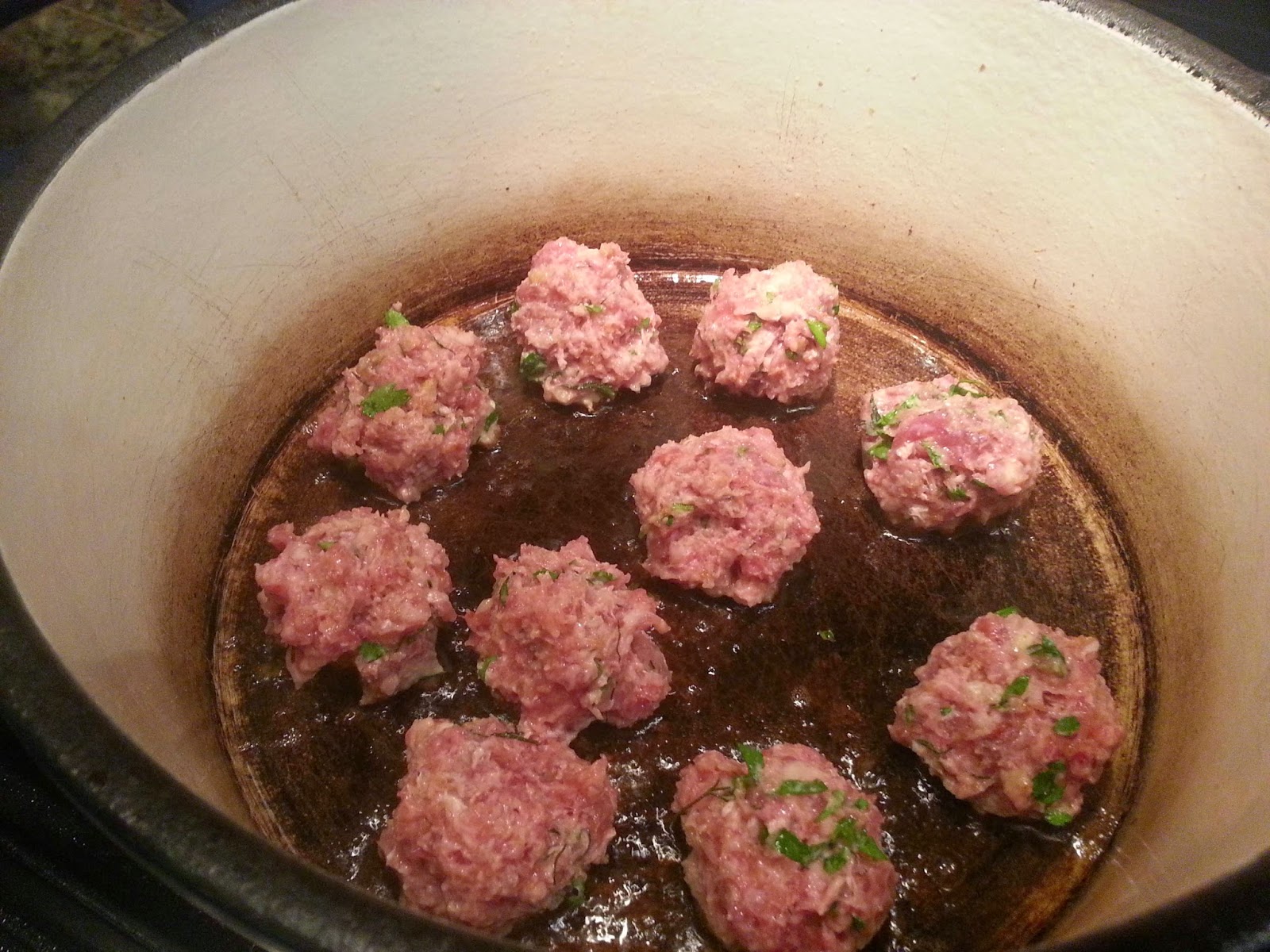 I did just like she said, brown on all sides and leave the center rare. It took me 4 separate rounds to make all of them. Then I started on the gravy. I didn't use her gravy recipe, because I really like mine, and I super don't like sugar in mine. So here's what I did.

Remove the meatballs from the dutch oven and add a touch more evoo. I used shallots this time because I didn't have any onions. I ended up using 2 pretty large shallots, diced up. Then added some garlic (I use the lightly toasted garlic in evoo that I always have on hand). I threw in some tomato paste- I use the squeezy tubes of it and used about half a tube. Which probably equals 2 to 3 tablespoons. I let that all cook together until it gets a nice deep auburn color. Then add 2 jars of crushed tomatoes. Currently, we use the Jovial Organic brand that are plum tomatoes from Italy. I believe it's the only brand of jarred crushed tomatoes that they sell at the Whole Foods by me. And I love that they don't add basil or anything to it. Just do me a favor and NEVER EVER EVER buy cans of crushed tomatoes. SO. MUCH. BAD. Just say no. I digress.

Then, I fill the jars about half way with filtered water, shake it up to get all the tomato remnants out of the jars, and add that to the pot. Then throw your meatballs back in, let it get to a low boil, then simmer for however long you feel like, but make sure the meatballs are cooked through before you turn it off. You won't even need to add salt or pepper because the meatballs impart such an amazing flavor. Caution- if you add salt at the beginning, it will almost definitely be too salty by the time it's done cooking. 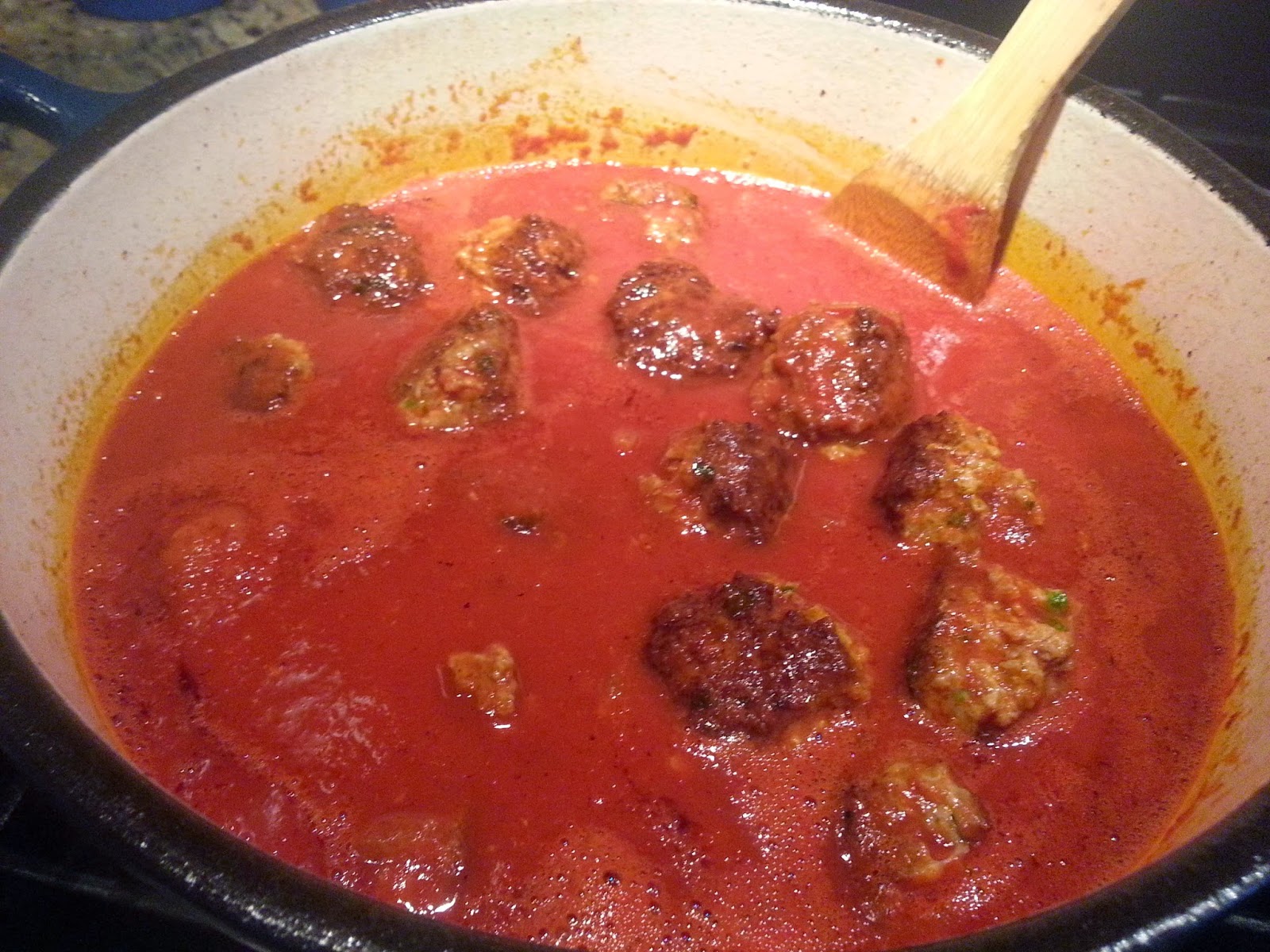 Your entire house will smell like Italy and you will love it. You also will not be able to stop eating by the spoonfuls, or dunking bread into it while awaiting your spouse's arrival.

And also, you may have some adorable helpers who want to help you eat it by the spoonfuls. And take pictures. 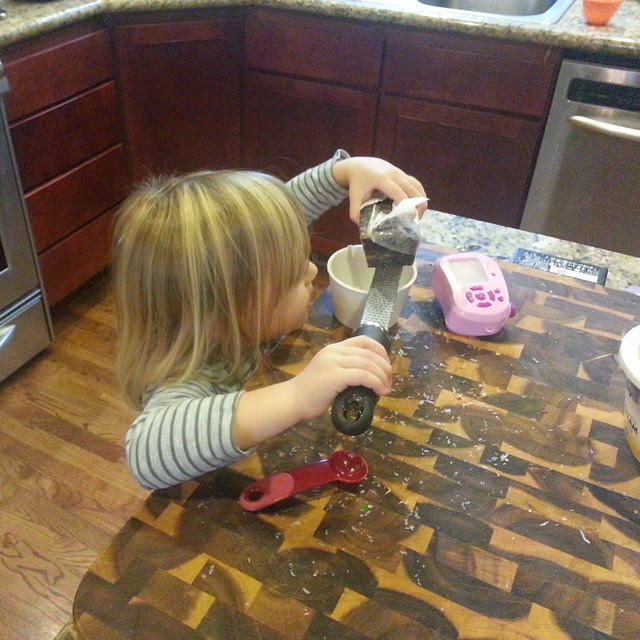 So yeah. Anytime you want a cozy, comfort meal, make this. It really doesn't take long at all, and it's SO WORTH IT. I'll be eating it again at 10:30 tonight after my son sucks the life out of me, er, nurses to sleep. For hours.