This is not an easy post. This is what I think about when the lights are out and the fam's asleep and the noise of the day has finally turned off. It's also something I'm not sure I'll ever know the answer to, or if I even want an answer to. Just some ramblings that I thought I'd share...because I can't be the first mom to struggle with this.

If you're new here, I am the proud mamma of a preemie babygirl. Born 10 weeks early due to placental abruption, she flew into this world dramatically and forcefully, and that's just how she likes it. She's now almost 23 months old (about 20 months adjusted age), and learning new things every day.

But that's just it. She's not learning the same things that other kiddos are learning. Some of that is most likely my fault- I don't do a lot of learning based play with her. We don't go over our colors, our letters, our animals. We throw tennis balls, we dance wildly to Pandora, or just the music in our heads. We tickle fight. We giggle. We cook dinner together. We clean together. She wears all of my underwear around her neck. And anything with handles is her new purse that she prances around with. We have naked time, and she attempts to pee in her potty (sometimes just holding onto it as she sprays down the floor). We read the books she picks out. Usually more than once. She tries to dress herself, which a lot of times ends up looking like this: 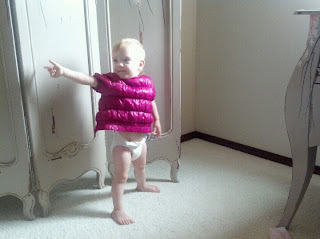 we take walks. we hang out with our buddies. we have long conversations- not quite sure how but girlfriend connects with me without having to know the words. I just know what she's thinking, feeling, wanting. And she gets what I'm saying to her.

She's finally picking up on more words, but she's not really using them that much. She repeats words when we ask her to, and she follows directions fabulously. But outside of the CONSTANT babbling and play acting, she feels zero need to say real words to us. (Of course, minus the HI DA!!! that the hubbs gets every time he walks in the door).

And therein lies the rub. The one that gets me all insomnia like. The voice in my head that has been telling me since college when I worked at a summer camp for special needs children and adults, that it was practice for my life. The quite insistence in my gut that I not get her vaccinated, because I know that she'll be changed forever by it. The something in my heart telling me that babygirl is just gonna be a bit different than her buddies.

Kiddos far younger than her have mastered some of these speaking skills that she doesn't have/ use yet. And I know that every kid works at their own pace. I really do. But that doesn't stop the voice.

And I know that she is doing things now that most kiddos her age don't do. Life skill type things. She knows how to bathe herself. She buckles herself into everything completely unassisted. She stops and really THINKS about everything- the mechanics of it. She does NOT stop to think about climbing anything and everything- but as far as how things work, she's a mini hubbs- the little engineer.  She knows how to dress herself, shoes on correct feet and all. Independent doesn't begin to describe it. Mamma gets shooed away a lot.

And yet. I'm not enrolling her in every let's-learn-our-colors classes like I thought I would. I'm not taking her to speech therapists. Please, she hasn't even seen her pediatrician since January. Part of it is the different studies I'm reading on all the different methods of parenting around the world. The one that caught my eye? Primary School starts at age 7 in Finland. And they "learn how to learn". It's a fascinating article, and one I hold close to heart, since that seems to be the strategy I'm going with currently.

I thought it might just be laziness on my part (and maybe it partly is), but the time I have to spend with her I really don't want to be forcing her to learn things that I feel will come naturally at some point. Having said that, I now of course am a little worried that words aren't coming quite as naturally as I thought they would. And since we've done heavy attachment parenting, I thought maybe she's not talking because all of her needs are being met so she doesn't need to. Should I ignore her so she'll ask me for things?

So. I read. A lot. And sometimes it's so comforting. To see that other cultures don't put SO MUCH into milestones. And their kids turn out just as smart. And sometimes I feel like a bad parent who has failed my child. But then I see how happy she is pretty much always and think I must have done something right.

This ball of busy will simply teach me more about God's timing. A lesson I'm not so sure I wanted just now, thank you very much.

My teenie preemie will someday learn to talk. I'm almost sure of it. When she's good and ready (stubborn little thing from day 1). And she might be a little behind her buddies. But she might catch up. And if she doesn't? Well, we'll tackle that when the time comes. I'm learning to take it in stride. I'm learning to deal with that voice. I'm sleeping a little better, sometimes.