Snooty Brownies: aka brownies with goat cheese, fruit and lemon

There are not enough words. This dessert is PERFECT for people who don't love overly sweet desserts. I am that person. I like a little tart. And I love fruit and chocolate together. Or chocolate with anything really, let's be honest. So I found a desert on The Kitchn blog. I loved the ingredients, but wasn't a huge fan of how it was made. So I tweeked. And I love it!

I saw the ingredients and knew I needed to make this, but I have never liked brownies that had a cream cheesy filling that was baked in it. I love cheesecake, so I don't know why it bothers me when it's baked into brownies, but it just does. Perhaps it's because you need a cakier brownie to hold up that cheese and I do not enjoy a cakey brownie.

So I decided to stick to my tried and true Carla Hall brownie recipe (minus the nuts and marshmallows). I will say that I've always needed to cook them longer than the 20 minutes she suggests, but I'm also pretty sure that I've never used the correct pan to cook them in. And also, grease the crap out of the pan. These bad boys are STICKY. And wonderful just by themselves.

But then, while they're baking, go ahead and make essentially what is the icing for these brownies. I take out the goat cheese at least an hour before to soften it. And I used mascarpone, both because the flavor is better than cream cheese and also because the texture is creamier. I used about equal parts of each and I just eyeballed it to see how much I think I needed to cover the brownies. I added a little sugar too. That is all to your taste. Like I said, I don't love overly sweet desserts, so I only added a little pinch.

I also made a fruit compote to add. I just took a bunch of frozen berries, stuck them in a pot, put it on low heat, and let them break down (with some help from my potato masher). I added lemon zest and lemon juice and some sugar and about 1/2 tbsp of corn starch to thicken it a tiny bit. Again, this is all to your specific tastes. I like mine tart, so I add a little and taste until I get it how I like it. It's all very scientific.

I didn't just throw the berries into the goat cheese mixture because I didn't want it to be pink icing, I wanted to see a swirl. But you totally could and it would be delicious. I just wanted a good picture.

Once the brownies cooled a little bit, a started to ice it. It was not easy. The icing was thick, and it was a bit challenging to spread. I would have added more mascarpone if I had any left. So I resorted to using my finger to spread it. Then I spooned some fruit compote on and swirled it in.

The rest? Is magical dessert-y history. 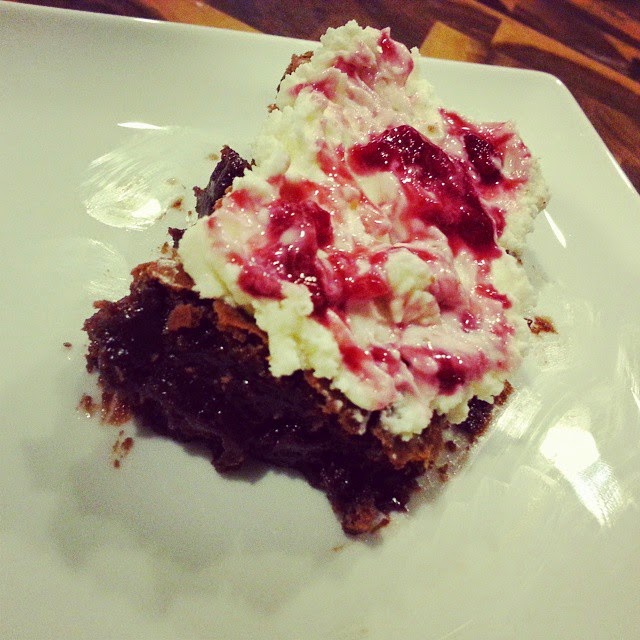