Yup. It's been too long.

After pregnancy was done kicking my ass, we brought home a baby boy. Under VERY different circumstances than babygirl. Little man was born at exactly 38 weeks via planned c-section, weighing 6 lbs 15 oz and 19.7 inches long. They were able to totally follow my birth plan, including putting him directly on me after pulling him out. He was held there by daddy and a nurse since I was trying my hardest not to puke everywhere. (That came the rest of the day, as I held and nursed him while simultaneously puking into a measuring cup. FAAAAAANtastic.) And we left the hospital after 2 1/2 days.

He is the mini Serbian that's for sure. Spitting image of daddy, except for the butt chin.

He's been surprisingly easy. He lets anybody hold him (although he fusses if he's put down, but since I'm all attachment parenting that works for me), he sleeps all the time, and was an excellent nurser right from the get go. I SOOOOO get how lucky I am. Babygirl was (and still is) high needs, so having a baby that's easy going is completely new, and welcome, territory. 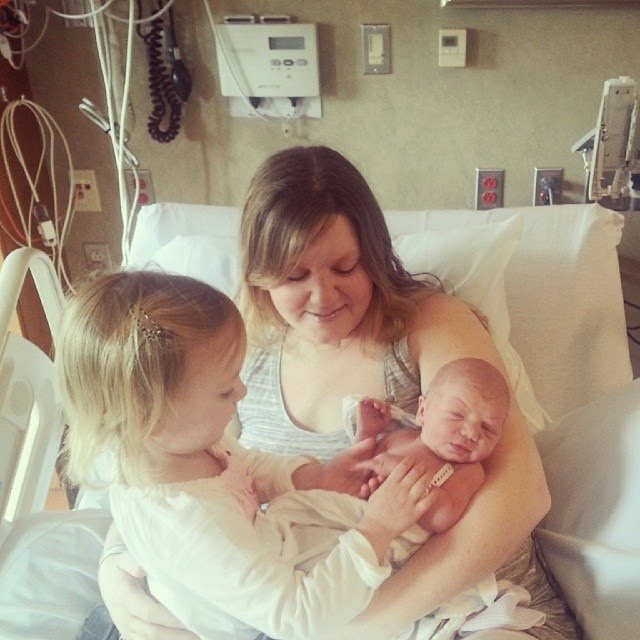 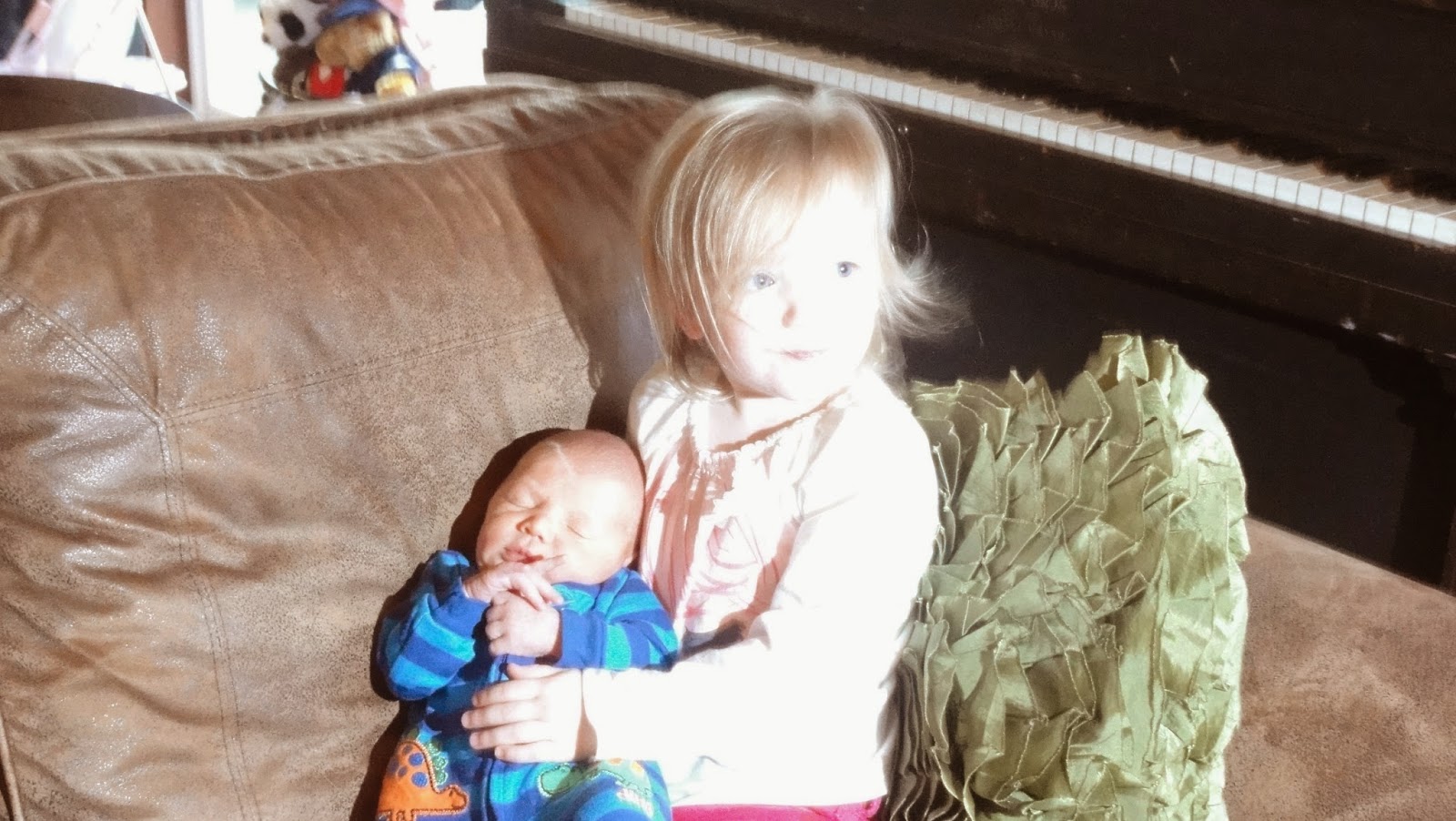 And here's where the hard comes in. She LOVES "baby Asher". Wants to hold him everyday, wants to kiss and hug and play with him. Talks about him a lot. She does NOT love that mommy is occupied with him. She gave me the cold shoulder in the hospital and didn't really unthaw until we were home for a day or two. EPIC. MELTDOWN. We did our time-in (I take her into a different room and sit with her as she melts down and wait for her to calm down and talk to me....it's amazing how well this works for her). She screamed for about 20 minutes. Then she looked at me, with just the saddest eyes that I will NEVER forget, she screamed, and then she crumpled. As did I. We both started sobbing, she threw herself into my lap while I just stroked her hair and told her that I know and I'm sorry that I wasn't spending as much time with just her, and we fell asleep. And she's been good with me ever since.

She started holding in her poop. I don't know if it's because she remembers how much it hurt when she got all stopped up right before baby came and now she's afraid to poop, or if it's just that toddler thing where new baby affects potty. But girlfriend strains to hold it in. Among prune juice, flaxseed oil, smoothies with spinach and yogurt and berries and chia seeds and coconut oil, apples, pears, figs, cherry tomatoes, olives.....this stubborn little thing STILL HOLDS IT. And then we have to start to coach and cheer her on when it's obvious she's trying to hold it. "Push em out, shove em out, waaaaay out!".

Yes, we have actually said that. In cheerleading fashion.

Then, she decided that she also would start screaming in pain while I tried to brush her teeth. Prior to baby, this was one of her favorite things to do. She even had a "practice" toothbrush she carried around with her so she could brush them all the time.

And the tantrums. Everything is now asked for with a whine and a whimper. Cause baby gets attention when he cries so hey why not? UGH. Her pediatrician said it was fine and he would be concerned if she weren't affected by his arrival. But I just CAN. NOT. Nana is leaving today and hubbs went back to work today, and I am just tired. I'm hoping that once we get into some semblance of normal, she'll start to get back to her old self. Until then she will continue to bust out phrases like "kill me now" like she did this morning (she *may* have heard mommy utter this under her breath while dealing with the brushing of the teeth).

And on top of the fun that never ends, there's a measles outbreak in Seattle. Frickin measles. If you read my blog, you may know how I feel about vaccinations. I don't think they're all bad, but I DO think that they give WAY too many at one time and at WAY too early an age, especially for someone that was born premature and is too tiny and may have digestive system issues, putting her at risk for vaccine injury. My gut instinct was to keep her from getting most vaccines until she was at least of school age, and to avoid some of them altogether (she will NEVER get the flu vaccine, and neither will anyone else in my family). I did 2 months of nonstop research while she was in the NICU, reading all the good, the bad and the ugly. I read several books, including my favorite, the Dr. Sears Book on vaccines. But since she doesn't go to daycare or school I thought I could avoid making this decision until she was 5. And then I got pregnant.

At little man's first pedi appointment, our doc, who is very vocal about which vaccines he thinks are garbage and which he feels strongly you should get, and who is also very pro alternative scheduling, asked if we were going to get her the MMR vaccine since measles are in the area. And hubbs and I have had a lot of conversations, all tear soaked by me, about the issue. We called my in laws, one was a surgeon in Serbia and now does alternative medicine therapy, and one was a pediatrician, and asked their opinion. I read more. I prayed. I cried. I prayed some more. I felt guilty about the whole "herd immunity" thing....and then I felt guilty for feeling guilty because my daughter could very well be one of the kiddos that had a too sensitive immune system to handle a vaccine like MMR. Because regardless of the debunked scientist regarding the autism claim, there are still PLENTY of parents who now have children with unalterable health issues due to the MMR vaccine. Seizures, brain injury, digestive health issues, etc. And I was NOT about to jeopardize her health because of someone else's child. Her health is number one on my list.

Except now we have a newborn as well. A newborn who I would prefer did not catch the measles. Well crap. So what's worse? I'm not concerned about babygirl getting the measles because she's never even had a fever, so I know she would be ok, although it would be unpleasant. But I'm pretty sure a newborn with measles is not a situation we want.

So I cried some more. A lot. Still crying actually. And we decided to do it. To vaccinate her. She's 2 1/2, she's been really healthy, and not only are the measles here, but we're flying to Jersey over Memorial Day weekend and they hit on the east coast too.

So nana and I took her today. She did not even flinch when she got the shot. No crying. Nothing. Just calmly ripped the band aid off of her leg and resumed playing with the dolls in the room. And so far, she still seems unaffected by it. My stomach is in knots, but I'm praying everything will be just fine.

These decisions. These parenting moments. These bumps in the road that were not expected. These are all really really hard. And torturing me. I'm an extremely visual person, and I like to jump to catastrophe (in my head). For 2 weeks, all I could think was that we would lose our sweet, happy, feisty, stubborn as hell babygirl to a vaccine that I didn't want her to get in the first place. Luckily, it looks like I was all drama for no reason. But it tore me up. And it's only gonna get worse. Because she'll eventually be a teenager and I can dream up all sorts of awful scenerios that I can't control and LOSE MY FREAKIN MIND on a daily basis.

Maybe these decisions will be a bit easier with little man. Less drama all around for him.

But probably not. Once a drama queen and all that....
Labels: constipation MMR natural remedies parenting vaccination